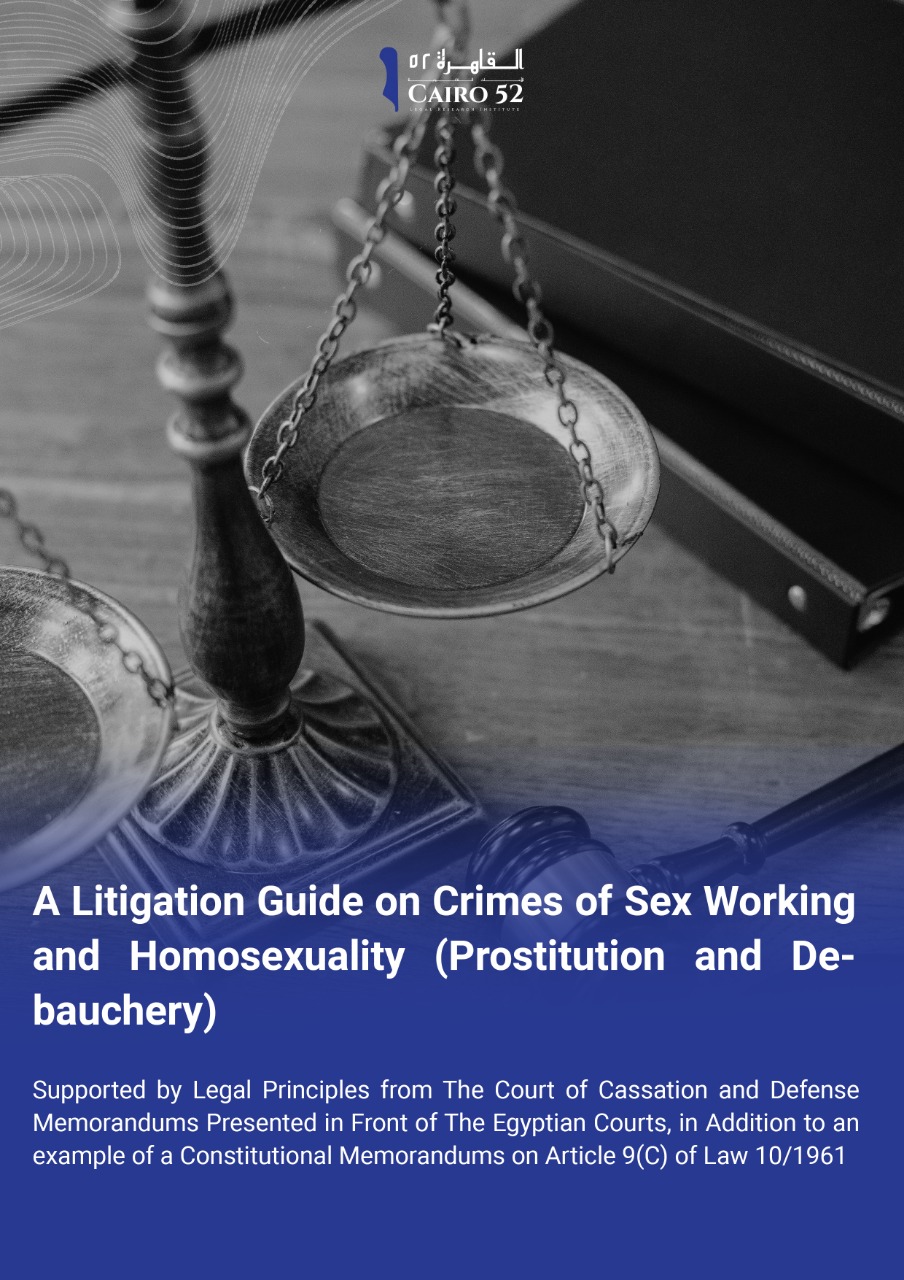 Supported by Legal Principles from The Court of Cassation and Defense Memorandums Presented in Front of The Egyptian Courts, in Addition to an example of a Constitutional Memorandums on Article 9(C) of Law 10/1961

This an English Summary of the book “A Litigation Guide on Crimes of Sex Working and Homosexuality (Prostitution and Debauchery) “. The book aims to provide a litigation guide and a legal overview of principles and procedures to legal advocates and whoever wishes to know more about “prostitution” or “debauchery” crimes under Egyptian law. The book is divided into three chapters; these complement each other to provide the best possible knowledge on the matter. The first chapter contains a brief explanation of the crimes covered in this book; practicing Habitual Prostitution or Debauchery, the incitement and aiding of Prostitution or Debauchery, the Advertising of Prostitution or Debauchery, and violating public morals. The second chapter provides the reader with a broad collection of legal principles issued by the Court of Cassation regarding the crimes discussed in the first chapter. The third chapter provides the reader with practical examples of different defense memorandums presented in the cases, which were reviewed by Misdemeanor, Appeal, and Cassation courts, in addition to one example of a memorandum regarding the unconstitutionality of the crime of habitual Prostitution or Debauchery. The aim of this book is to offer a comprehensive, yet understandable legal knowledge to a wider audience and provide young lawyers with guidelines they can effectively utilize in defense of their clients. The book consciously makes an effort to reach out to the wider public and not only legal advocates, and for this reason the text is presented in a way that allows everyone interested in sexual and bodily freedoms in Egypt to read and comprehend it.

Chapter one: Brief Legal Explanation for the crimes covered in this book.

Egypt only started criminalizing sex work or “Prostitution” as officially called in the early 50s. The Egyptian parliament passed law No 68/1951, which prescribed criminal sanctions for criminalized the entirety of the sex work industry. In 1959 Egypt (The United Arab Republic then) joined the Convention for the Suppression of the Traffic in Persons and of the Exploitation of the Prostitution of Others and the government brought the domestic law in line with the requirements of the Convention in 1961 with the adoption of Law Nr. 10/1961 on Combating of Prostitution. The scope of this law – which is criminal in nature – covers all aspects of the sex working industry and beyond e.g. homosexuality and transsexualism in some cases. Individuals can be prosecuted for aiding, inciting, seducing and advertising of debauchery or prostitution, in addition to, owning a brothel, forced sex work and habitual debauchery or prostitution. In this chapter, we will cover some of the actions criminalized by this law, in addition to the criminalization scope under Article 178 of the Penal Code. It is important to note that criminal crimes always consist of two core elements; actus reus and means rea, and whilst actus reus is changeable among different crimes, mens rea is almost always have the same elements to be fulfilled for the crimes under review in his book.

* This is a translation of only chapter one, chapter two and three are only available in Arabic. In chapter two, an extended bibliography of important legal principles from the Court of Cassation will be provided and in Chapter Three, we will provide practical examples from different defense memorandums regarding these crimes from different cases from 2014 to 2020. You can view the Arabic version from here.

Read or Download the English Translation of the First Chapter from Here: