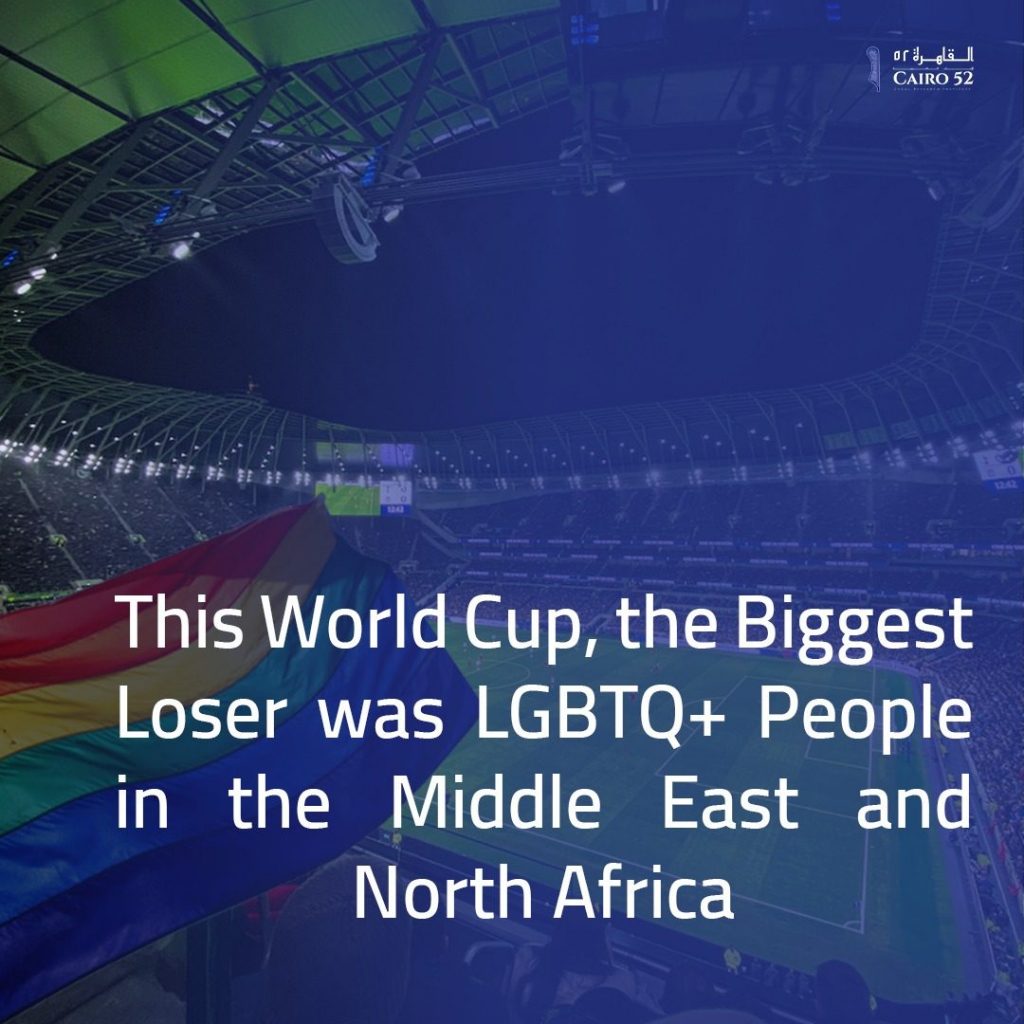 This World Cup, the Biggest Loser was LGBTQ+ People in the Middle East and North Africa

Western media and football teams had several options regarding LGBTQ+ rights in the World Cup; they could have used the World Cup to echo the voices of the region’s LGBTQ+ rights movement or shed light on the abuses LGBTQ+ people face. Instead, they have chosen the worse possible option, to focus on Western-centric performative actions that harmed the region’s LGBTQ+ people.

The Western-centric LGBTQ+ narrative during the World Cup have been primarily concerned with maintaining a moral image in front of the Western public. The performative Western-centric actions of the teams involved in this narrative indicates that the they were mainly concerned with finding a moral justification for playing in a World Cup rigged with human rights abuses.

Western-centric activism is criticized for being harmful, failing to understand local contexts, and treating human rights as a West-East export, not something that can generate locally. Thus, in recent decades, the global human rights movement has moved to decolonize human rights organizing by focusing more on supporting local rights groups that know best how to strategize according to their contexts.

However, it seems that Western media and football teams did not get that memo, as the discourse they followed reflects everything wrong with Western-centric activism. The West went into the World Cup with a white-savior complex, believing that only they could save the region’s LGBTQ+ people, ignoring the existence of a robust regional movement.

Perhaps, there is no better example of a white savior complex than what Peter Tatchell, a British LGBTQ+ activist, did just weeks before the beginning of the World Cup. Mr. Tatchell decided to perform a stunt while transiting through Doha’s international airport and staged a one-person “protest” against Qatar’s LGBTQ+ record. While Western media celebrated Mr. Tatchell’s supposed bravery, his actions were slammed by some of the region’s activists as nothing but Western-centric white savior activism. Mr. Tatchell knew that his Western privileges would shield him from any harm by Qatari authorities. Moreover, it was later revealed that Mr. Tatchell was in contact with LGBTQ+ people residing in Qatar, who requested that he wouldn’t do such a stunt for their safety.

Later, seven European teams got into a pity fight with FIFA over wearing the one-love armband during their games. The teams claimed this was their way of “showing support” to the region’s LGBTQ+ people. However, the moment FIFA threatened a yellow card; the teams backed off and decided not to wear the armband. The German team decided to do one final performative act when its players covered their mouths at the World Cup to protest FIFA limiting their freedom of speech.

Those familiar with the region’s LGBTQ+ rights know that all of those Western-centric acts are harmful to the region’s LGBTQ+ people, as it feeds into the belief that LGBTQ+ rights are part of a greater cultural war between the Middle East and the West. The Qatari discourse on the issue during the World Cup is the most common among authoritarian rulers and conservative actors. In recent years, those actors have been working to detach LGBTQ+ rights from human rights by framing it as a cultural and ideological issue. While human rights are not negotiable, culture is something to be respected.

Thus, LGBTQ+ people and activists of the region are framed as “Western inventions or agents” that aim to spread Western immorality in society. In 2022, several countries in the region, including Qatar, banned Western movies for their depiction of LGBTQ+ people and launched a campaign against “rainbow toys,” claiming that those toys are part of a Western conspiracy to corrupt children. Meanwhile, a major anti-LGBTQ+ social media campaign called “Fatrah” started in Egypt and quickly spread all over the region, gaining millions of supporters and claiming that there is a “Western agenda” to corrupt the youth.

What is interesting about this discourse is that it always claims that fundamental human rights for all are guaranteed, that this is not a hate speech or call of violence against LGBTQ+ people, but rather a call to preserve the Middle Eastern culture and social values from Western ideals. This discourse is also no different from the global anti-LGBTQ+ discourse, which often uses youth and children as a token to limit LGBTQ+ rights and spread hate speech against LGBTQ+ people.

Getting to the World Cup, the region anti-LGBTQ+ actors benefited the most from the clumsy and sometimes outright racist coverage of the event. Western media did not only fail to understand local contexts but also emphasized the West vs. East LGBTQ+ cultural war’s discourse. Anti-LGBTQ+ actors quickly co-opted the post-colonization ideals and terminology for their goal, claiming that Western media coverage is a form of neo-cultural colonization and Islamophobia and that the “white man” is trying to force the LGBTQ+ ideology on them. Moreover, the region’s anti-LGBTQ+ actors already knew that Middle Eastern societies were tired of the West preaching about human rights, especially after the racist coverage of Ukraine’s war. Some reporters couldn’t help but point out that people should care about this war because it involves civilized Europeans, not Syrians or Iraqis.

Thus, the Western-centric discourse during the World Cup seems to have harmed the region’s LGBTQ+ people more than anything else. Neighboring Kuwait and Iraq have already launched a nationwide anti-LGBTQ+ Campaign in response to what happened during the World Cup. More state-sponsored anti-LGBTQ+ campaigns will likely occur across the region after World Cup. When the attention is gone, it will be LGBTQ+ people left holding the bag, as one queer man living in Qatar told Reuters, “What happens when the World Cup is over? Does the focus on the rights stop?”

This module celebrates the region’s queer history and people and focuses on normalizing queer identities within the greater society to combat the “Western invention” narratives. This module also requires the West to ally in their struggle for queer liberation; however, allyship is very different from what happened during the World Cup. Those who genuinely care about the region’s LGBTQ+ rights should spend more time listening and learning from the region’s LGBTQ+ people to know how to best support them. While Mr. Tatchell was busy doing his media stunt, Human Rights Watch published a report detailing the abuses LGBTQ+ people in Qatar face, using the World to draw attention on the issue. Those two examples show you the difference between an ally and a Western-centric white savior.

The West should also realize that it did not invent LGBTQ+ rights and has no monopoly over how they spread. On the contrary, the West did play a significant role in eliminating LGBTQ+ identities globally during the colonization era. Modern LGBTQ+ rights are not a stand-alone matter, as they stem from fundamental human rights such as rights to privacy, equality, and non-discrimination. Thus, it is essential when trying to promote LGBTQ+ outside Western contexts to intersect LGBTQ+ rights with other fundamental rights to gain more acceptance from society.

Finally, FIFA is expected to make $7.5bn in revenue from this World Cup. At the same time, the participant reward for any team played at this year’s World Cup is $9mil; It increases if the team advances to the knockout stages. Meanwhile, According to Global Philanthropy Project (GPP), a philanthropy group that works on monitoring global LGBTQ+ funding, the region’s LGBTQ+ movement was the least-funded region of the world regarding LGBTQ+ funding, with $8.7mil annually in 2020.

It is crucial to translate supportive words and symbols into concrete actions. Even if FIFA is less inclined to donate to human rights causes, individual teams should take the lead and do so. The seven teams involved in the one-love arm band controversy announced before that they were willing to pay fines for wearing the band. So, maybe instead of paying fines to FIFA, they should donate part of their winnings to support the region’s LGBTQ+ rights.