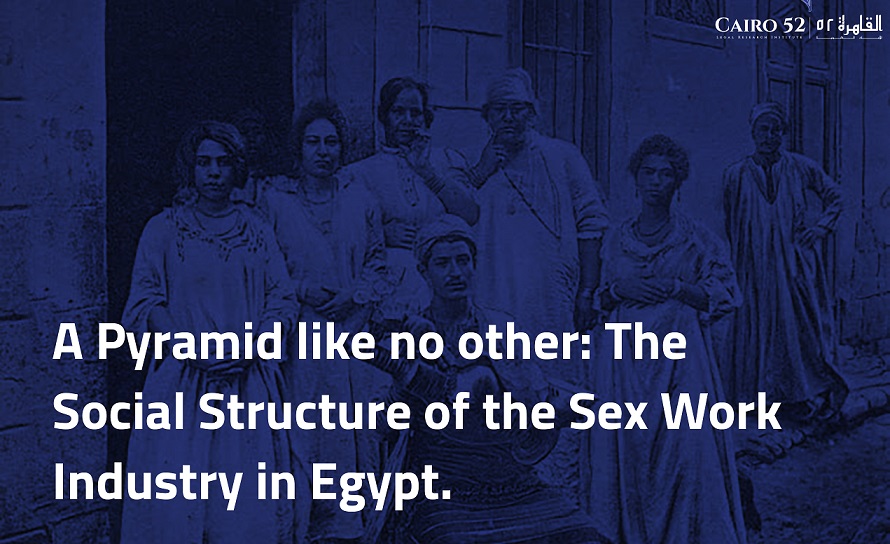 A Pyramid like no other: The Social Structure of the Sex Work Industry in Egypt

Sex work remained legal in Egypt until the year 1949 and for this industry, as most industries at the time, there was a classist social structure in place, where every individual in that system had a very specific job. When this structure was operating, it played the role of the government which was absent in this industry; even though there was a number of laws that had passed in modern Egypt to regulate this industry starting from 1896. But these laws for the most part remained just ink on paper, especially when it came to foreigners working in this industry, as during this era only foreign embassies were responsible for handling cases brought up on its citizens.

But before we jump into the social structure of sex workers in Egypt during that time, we need to note that there were two societies working in parallel in that industry.

The first society was reserved for Licensed Brothels for whom the Ministry of Internal Affairs had its own division tasked with monitoring and making sure they were not breaking the law; as those brothels did not have the legal right to just pop out and operate anywhere, but rather had specific areas they can exist in, such as “Bab El-Sha’ria” (The Door of Sha’ria) in Cairo and “El-Sabah Banat” (The 7 Girls) in Alexandria.

The second society was outside the rule of law and were called “Secret Houses”. Those houses operated away from the eyes of the police, mostly in neighborhoods where they were not licensed to offer these kinds of services especially during World War II, as the number of allied troops in Egypt increased, and so did the number of foreign sex workers coming into the country to serve those troops. Outside these secret houses, there was an even lower form of sex work known as: “the Holes System”, in which a sex worker would go to an area on the outskirts of the city and do business in a hole that was dug before by the government to keep the city safe from being flooded in the winter in the ground in the desert or on the mountains, in areas like “El-Gabal El-Ahmar” (The Red Mountain) near “El-Abbasyia” and “Tal Zehinem” near “El-Sayda Zayneb”.

At the base of this social structure you will find a class called “El-Maqtorat”, which means ‘female sex workers’ and within this group you would find a smaller social structure with its own subclasses and at the top of that structure, there was a group called “Artists” of European sex workers who lived in high-class neighborhoods and provided services to the society’s elite. The second group was comprised of Europeans as well, but they were mostly middle-class and lastly, we find the national and non-European foreigners.

When we reach the last group, the social structure breaks down again to an even smaller one where you can find mainly three subgroups; the “El-Haraht El-Mostatrat”: those were sex workers who would move around the city in carriages or on animals and with them you would find a young man working as their broker to the customers. Then you would find a group called: “Moghanyat and El-Raqsat”, which means singers and dancers: a group where they would have their own place and their customers would come to them. The last group was called “EL-Motwat” and they lived in an area called “El-Wasah” where they usually stayed in and did not go out and would sit by their windows to try and hunt customers from the streets.

The next social class in the structure is a group with the name of “El-Sahabyen”, those were the ones responsible of bringing in new girls to work in the brothels. However, their job descriptions didn’t stop at that, as they were also responsible for getting anything the brothel may need such as food and makeup, and taking the sex workers to the hospital to get their monthly STD checkups required by law at the time.

Those were the strongmen who played the role of the sex workers’ “lovers”. You might be fooled, but the term ‘lover’ here does not mean that the relationship between the two was based on love or affection, but it was mostly a beneficial relationship only, as the sex workers would often need a strongman to protect them from the risks of this profession and in return, the guy would receive a long-term sexual and sometimes emotional relationship. The word “El-Baramgy” itself came because women used to cook a famous meal in “Tajine” known as “Borma” for those men and then those men were named after it.

The second group was called “El-Balatgy” and it was reserved for guys who were often violent with the sex workers and this group often took many sex workers as their mistresses. This group also operated as foot soldiers for the pimp of the brothel.

Those were the women who had been working in the industry for so long and were well over the age of 50. This group was considered ‘second class’ in the social structure. They would often sit in front of the brothel to collect fees and make sure the sex workers were ready to receive customers. These women were known for their exploitation of sex workers, as they would often force the sex workers to sign promissory notes, checks or trust receipts to use against them in case they decided to run away from the brothel.

An interesting point in this class though was that they had an “Honor Code” and in this honor code, there were rules all the “Padronat” had to follow. One example was a “Padrona” would not receive a sex worker belonging to another “Padrona”, and if a “Padrona” would receive a sex worker, this sex worker must repay all of her debts to her former “Padrona” but if a “Padrona” wanted a current sex worker, she would pay her current “Padrona” all of the debts and then she may receive her. It is worthy to note that officials and authorities kind of respected that “code of honor”, for example the hospitals where the sex workers would go to get their monthly STDs tests would not release her unless her “Padrona” comes to pick her up and for the police, they would honor the agreements a “Padrona” had with her sex workers and arrest the sex workers if the “Padrona” accused her and showed the promissory notes, for example.

The name “El-Hayaqa” isn’t clear what its origins were, but some historians believe they were named so because they would use a lot of makeup and “El-Padrona” comes from the Italian ‘Padrona’ which means the mistress.

Alone, he sits on the throne watching his empire. Those pimps would exploit the sex workers the most in the social structure. A pimp lives on whatever the sex workers bring and does not care whether the sex worker is sick or tired, they have to work to get money for their pimps and if a pimp would bring a customer that the sex worker does not like, it wouldn’t matter because she would still be forced to serve him. A pimp would never give a sex worker her full wage and would often take a huge cut for himself based on the imaginary services he is providing for the sex workers, services that do not exist except in his head. One incident that happened and proved the extreme abuse the sex workers were going through by their pimps, was when the police raided the house of a famous pimp and found huge containers of old cheese, onions and bread. Later they found out that that so-called “food” was the only source of nutrition given to the sex workers working for him.

Those were the pimps of the brothels, but if we move to the outskirts of the cities, we will find a group of pimps that were even more abusive than the first one: the “Holes” pimps, as they would force the sex workers to stay in the holes in the ground all day receiving customers and collecting their semen in small cups to give her pimp later and based on the number of cups, she would receive her pay for the day.

Khawal and Jenky: Those were the male dancers who appeared after the ban of public dancing for females by Muhammed Ali Pasha in Cairo. Those men would dress, look, and act like women and entertain customers with their dancing. Those men were comprised of two groups: “Khawal” was kept for men who were native Egyptian while “Jenky” was the word used for foreigners.

El-Saramha: were male sex workers who were working to service women who were interested in that. These women were often either old or foreigners, and in both cases, rich and the male sex worker would either go to provide the services at his customers’ houses or rent a room in a brothel for that.

EL-Hosngya: Homosexual sex workers and this term was exclusive to the bottom side of the homosexual relationship only. This group existed mostly in “Louver” coffee shop at “Wagah El-Barakha Street” and “Attaba Square” and “Kloot Bek Street”. El-Hosngya were known for being more feminine and having a number of lovers, as well as having a mixed, gender non-conforming look as they usually looked more feminine and wore male clothes and often used “female names” as a way to express themselves.

In the end we find that the industry’s social structure then was not very different from any other industry social structure of the time, as it was classist and a reflection of the bigger social structure in Egypt at the time which was also very classist. However, it is worthy to note that it wasn’t that bleak for all sex workers working under that system and unlike what historians like to promote, not all sex workers were victims and forced into the business, but not a lot went into the business at their own will and left unharmed. It is important to keep in mind how the society back then received the gender non-conforming men working in this industry and not automatically think of harming them but more of having a co-existential approach to them.

Finally, the whole industry had ended by the year 1949 when the military governor issued Decree Number (79), in which he ordered the closure of all sex-working brothels in the country. He followed that with the outlawing of any sex working activity in the country by law in 1951 and instead of trying to provide a more safe environment for sex workers and people who are working in the industry, Egypt decided to follow what was the more common thing to do at that time globally and just banned the entire industry, and with that, we close a page of sex working history in Egypt. 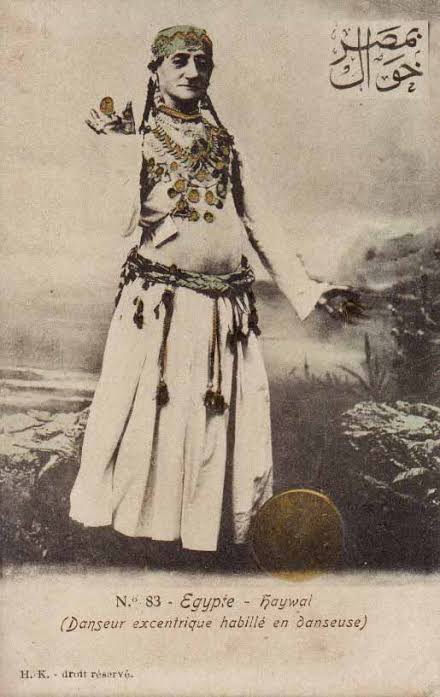 Male Dancer (Khwal) from Egypt in the year 1907